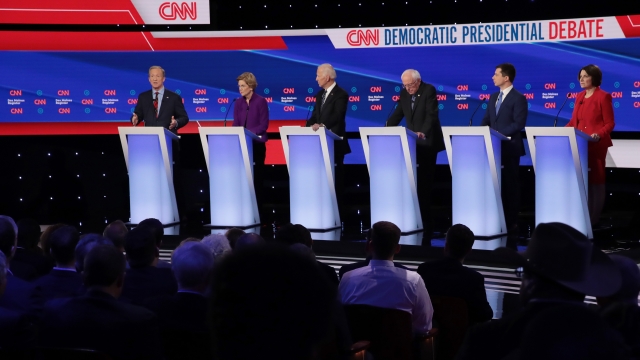 Democratic presidential hopefuls took the stage in Des Moines Tuesday night for the first debate of 2020 and the last debate before the Iowa caucuses.

The first focus on the night was foreign policy. Moderators asked about the current crisis with Iran and whether U.S. troops should remain in the Middle East.

SEE MORE: The U.S. Still Has Thousands Of Troops In The Middle East

“The two great foreign policy disasters of our lifetimes were the war in Vietnam and the war in Iraq. Both of those wars were based on lies. And right now, what I fear very much is we have a president who is lying again and could drag us into a war that is even worse than the war in Iraq,” Sanders said.

“We can continue to remain engaged without having an endless commitment of ground troops. But what’s going on right now is the president’s actually sending more,” Buttigieg said.

“What we are hearing is 20 years of mistakes by the American government in the Middle East, of failure, of mistakes. .. . The money that we’re spending there, we could spend in the other parts of the budget, and it’s time for someone from the outside to have a strategic view about what we’re trying to do and how to do it,” Steyer said.

On the issue of trade, most of the candidates expressed support for the USMCA, which still needs approval from Congress.

“This new trade deal is a modest improvement. Senator Sanders himself has said so. It will give some relief to our farmers. It will give …read more