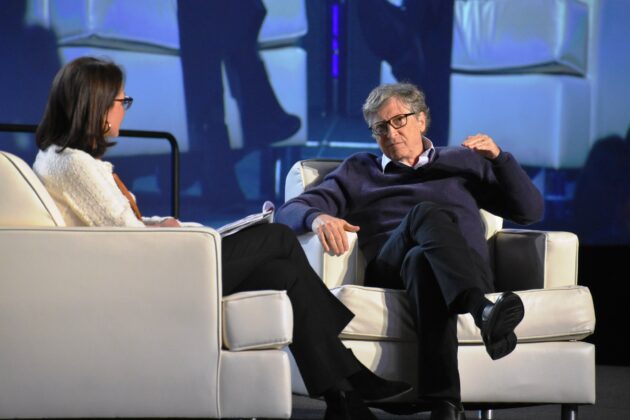 Microsoft co-founder Bill Gates makes a point during a Q&A with Margaret Hamburg, board chair for the American Association for the Advancement of Science. (GeekWire Photo / Alan Boyle)

Microsoft co-founder Bill Gates has been working to improve the state of global health through his nonprofit foundation for 20 years, and today he told the nation’s premier scientific gathering that advances in artificial intelligence and gene editing could accelerate those improvements exponentially in the years ahead.

“We have an opportunity with the advance of tools like artificial intelligence and gene-based editing technologies to build this new generation of health solutions so that they are available to everyone on the planet. And I’m very excited about this,” Gates said in Seattle during a keynote address at the annual meeting of the American Association for the Advancement of Science.

Such tools promise to have a dramatic impact on several of the biggest challenges on the agenda for the Bill & Melinda Gates Foundation, created by the tech guru and his wife in 2000.

When it comes to fighting malaria and other mosquito-borne diseases, for example, CRISPR-Cas9 and other gene-editing tools are being used to change the insects’ genome to ensure that they can’t pass along the parasites that cause those diseases. The Gates Foundation is investing tens of millions of dollars in technologies to spread those genomic changes rapidly through mosquito populations.

Millions more are being spent to find new ways fighting sickle-cell disease and HIV in humans. Gates said techniques now in development could leapfrog beyond the current state of the art for immunological treatments, which require the costly extraction of cells for genetic engineering, followed by the re-infusion of those modified cells in hopes that they’ll take hold.

For sickle-cell disease, “the vision is …read more