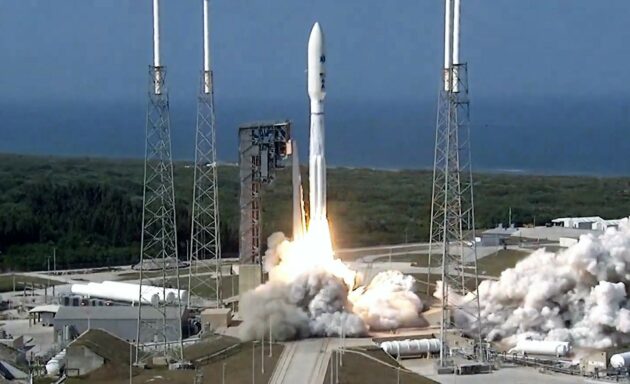 The first satellite mission conducted under the name of the U.S. Space Force got underway today with the launch of the AEHF-6 military communications satellite atop a United Launch Alliance Atlas 5 rocket.

Liftoff took place from Cape Canaveral Air Force Station in Florida at 4:18 p.m. ET (1:18 p.m. PT), after a delay of more than an hour that was caused by a problem with a hydraulics system. The Atlas 5’s Centaur upper stage is due to reach the intended altitude for satellite deployment more than five hours after launch. Along the way, the rocket will release a small secondary payload known as TDO-2.
AEHF-6 is the sixth and last satellite for the U.S. military’s Advanced Extremely High Frequency constellation, which provides secure communications for warfighters on land, air and sea. It’s taken 10 years to build out the network of Lockheed Martin-built spacecraft.
This Atlas 5 was the first rocket to brandish the Space Force logo instead of Air Force insignia. The Space Force was established last December, and management of space-related assets is shifting to the new military branch. The official renaming of Cape Canaveral’s launch facility as a “Space Force Station” has been postponed, however, due to the coronavirus outbreak.
…read more