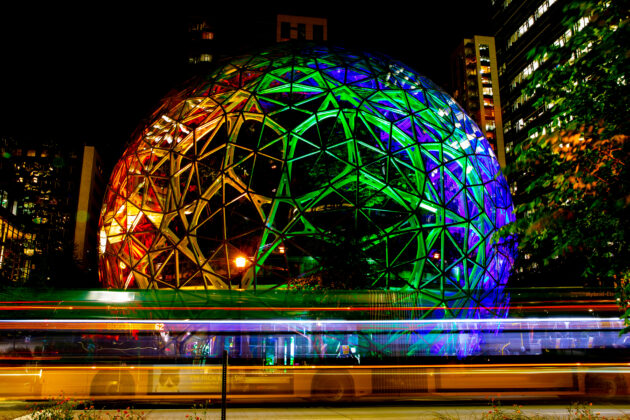 The Spheres on Amazon’s downtown Seattle campus were once again lit in a rainbow of colors on Sunday to celebrate Pride and mark the 51st anniversary of the Stonewall Riots that served as a catalyst for the gay rights movement.

The plant-filled glass domes, which serve as unique office space for the tech giant, have previously been awash in color as a signal of celebration for the LGBTQ community.

Tori Dean Clements, global board advisor for the Amazon affinity group glamazon, wrote in a company blog post of the historic times we are living in and how people are demanding justice similar to the way groups did in 1969.

“As we light the Spheres in rainbow, the symbol of our movement and our freedom, let us also reflect on history and the necessity to address systemic racism to honor the Black activists and leaders who gave us that freedom to love so loudly today,” Clements wrote. “Let us do what we do best, learn from those that came before us, and stand in unity with our Black brothers, sisters, femmes, and thems.”