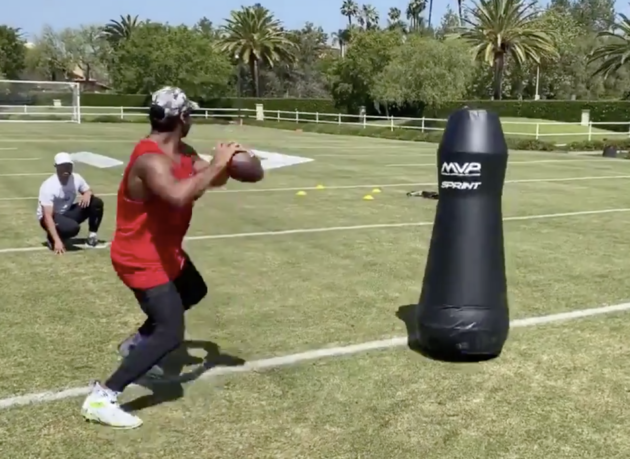 Seattle Seahawks quarterback Russell Wilson gets set to pass as an MVP Sprint dummy rushes toward him during an off-season workout. (Twitter screen grab)

This might just be the answer to eliminating player injuries (and salaries!) in the National Football League. Send in the robots.

Seattle Seahawks quarterback Russell Wilson is prepping for the upcoming season at home, and while other videos have captured him working out with real life human teammate D.K. Metcalf, we were struck by his opponent in a tweet on Tuesday.

During passing drills, Wilson is seen evading a robotic dummy coming in on the pass rush. The equipment is an MVP Sprint, a mobile, remote controlled, self-righting, padded training dummy that weighs 160 pounds, runs at 16 mph and sells for $3,450.

Don’t give up for good on Seahawks defender Jadeveon Clowney just yet, but the tech is pretty cool.

Fired up to be the Chief Football Advisor & Partner with these “dummies!” Haha 😂 @MVPDummy 🏈🏈🏈 pic.twitter.com/nPsddtQW1M

Two camera angles capture Wilson stepping out of the way of the tech-fueled defender. He even gives the thing a slap as it retreats back to its position.

According to its website, Mobile Virtual Player, or MVP Robotics, began as a collaboration between Dartmouth head football coach Buddy Teevens and a group of engineers and athletes from Dartmouth’s Thayer School of Engineering. They developed the world’s first robotic tackling dummy to help reduce unnecessary contacts and the incidence of injuries suffered during football and other sporting practices.

The company was the winner in the “Training the Athlete” category in the NFL’s 2017 “1st and Future” competition, a collaboration between the NFL and the Texas Medical Center to award startups focused on …read more