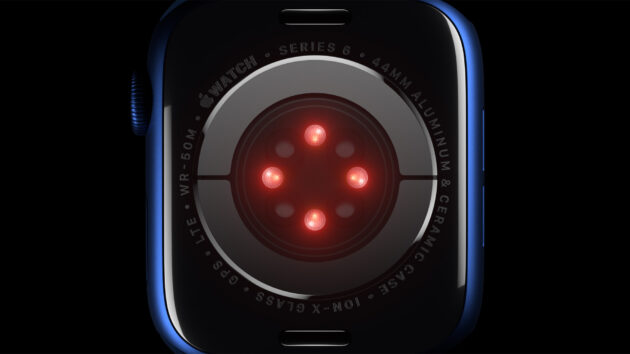 Apple announced three research studies, including one with the University of Washington, taking advantage of the blood oxygen measurement feature in the new Apple Watch Series 6. (Apple Photo)

The blood oxygen measurement feature in the newly announced Apple Watch Series 6 will provide one of the key inputs for a study seeking to determine if the device can detect early signs of acute respiratory infection such as the flu or COVID-19.

Apple and University of Washington Medicine researchers plan to launch the study later this year, tracking participants during the upcoming flu season.

Announced during Apple’s virtual event on Tuesday morning, the “first-of-its-kind study” will “allow scientists to draw a relationship between associated symptoms, signals from Apple Watch and iPhone, and test results for influenza and COVID-19,” according to a UW news release that offers more details on the plans.

In addition to blood oxygen, the study will take into account data such as heart rate, physical activity and sleep patterns. The research will also incorporate and study behavioral interventions such as reminders for Apple Watch users to wash their hands. Participants will use home testing kits that detect flu and the SARS-CoV-2 virus, which causes COVID-19.

“The hope is that physiological signals from the Apple Watch will make it possible to identify people who are falling ill, and get them tested quickly so they can self-isolate and break the chain of transmission of the virus in the community,” says Dr. Jay Shendure, director of the Brotman Baty Institute and a UW School of Medicine professor of Genome Sciences, in the news release.

Researchers from Apple, the UW School of Medicine, the Brotman Baty Institute for Precision Medicine, and the Seattle Flu Study will conduct the …read more