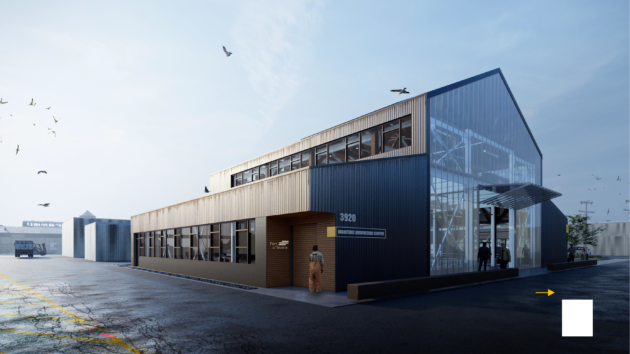 A rendering of the new Maritime Innovation Center in the Fishermen’s Terminal, near Seattle’s Ballard neighborhood. (Port of Seattle Image)

The maritime accelerator program first launched at the beginning of 2020 in partnership with WeWork Labs, the co-working company’s startup incubator. Participating startups get access to mentors and advisors, as well as a chance to attend workshops that help guide entrepreneurs through challenges and obstacles.

Entering the second year, WeWork is no longer participating in the accelerator and Maritime Blue has stepped in to facilitate mentorship and programming. The Port of Seattle plans to provide a new physical space for the accelerator, and other ventures, with its new Maritime Innovation Center at Fishermen’s Terminal, one of the Port’s properties near Seattle’s Ballard neighborhood. Construction on the project is expected to start this year.

The blue economy: Maritime Blue was founded in 2018. It’s part of a strategy laid out by the Washington Department of Commerce and Gov. Inslee’s Maritime Innovation Advisory Council to grow the region’s “blue economy,” a movement for the sustainable use of ocean resources for economic growth.

Two of Maritime Blue’s major initiatives are modeled after those in the tech industry. These include Blue Capital, aimed at supporting early-stage investments in maritime, and the Maritime Blue Innovation Accelerator.

“I could not be more excited about this because it’s an extension of the basic value system of the state of Washington,” Inslee said at the launch last year, pointing to other local innovation …read more