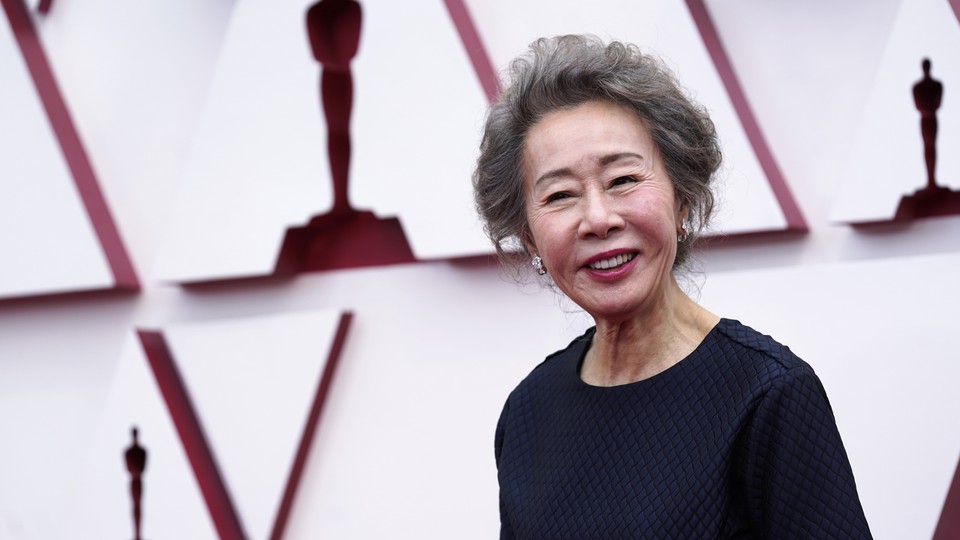 When she took the stage to accept the Oscar for Best Supporting Actress last night, Youn Yuh-jung claimed something else, too: her name. The South Korean actor said it clearly for everyone watching and then noted how often it is mispronounced. “Tonight, you are all forgiven,” Youn said cheekily—effectively pardoning Brad Pitt, who had made such a mistake when he announced her victory.

The 73-year-old actor went on to give the night’s standout speech, in which she demonstrated why she’s nabbed nearly every supporting-actress trophy this award season—and why it’s been such a joy to watch her win. Youn delivered a lively, acerbic performance in Lee Isaac Chung’s warm drama Minari, which Pitt’s Plan B Entertainment produced, as a matriarch who moves from Korea to stay with her daughter’s family in Arkansas. The cantankerous but loving character of Soon-ja adds unexpected dynamism to the home, and lends real frisson to the quiet 1980s-set film. If Minari was inspired by Chung’s childhood, Youn brought some of her own family history to her role: She told my colleague Shirley Li that she modeled Soon-ja after her great-grandmother.

The actor’s charming acceptance speech, which she said she didn’t prepare ahead of time because of the caliber of her category’s contenders, was a highlight of this year’s ultra-laid-back, pandemic-era ceremony, held mostly between Los Angeles’s Union Station and Dolby Theatre. Youn, of course, is not her character. But she delighted for many of the same reasons that Soon-ja does. The actor imbued her words with generosity, as well as dry humor. She thanked her two sons, “who make me go out and work,” holding her trophy up and declaring that it’s “the result because Mommy works so hard.”